NZers like to think our mainstream media are “balanced” and “neutral,” unlike in the UK or US. That’s becoming less and less credible. New Zealand print media is basically owned by two companies: Fairfax (Stuff, Press, Dominion etc) and APN (Herald). I’ve written about Fairfax a few times before; they have a major crush on the personality of John Key and a banal pro-National way of framing things (compare this headline with this one, for example; though the articles themselves are more balanced).

I haven’t mentioned the Herald so much – they usually seem not quite as bad as Stuff. But it’s worth reviewing what they’ve been up to over the last few weeks, in case you need any more convincing that our corporate newspapers are biased towards the corporate party.

The New Zealand Herald and its reporters:

You could say the media just love a good political scandal, whoever’s the target, and it just happens that Labour’s the target this time (and often an easy target); and that sometimes the press get it wrong, and it just happens they were wrong this time. That’s basically how they’re defending themselves. But what precedent is there for major media outlets doing similar things to these for the other side? When Labour were in government, Labour were the press’s main target (notwithstanding Brethren, and certainly since Key’s ascendancy); now, in opposition, they still are (notwithstanding teapots).

Anyway, I can’t for the life of me work out what all this has to do with one in four children living in poverty, skyrocketing inequality, skyrocketing housing costs, climate change, the last 55 Maui’s dolphins, our native forests, a floundering Christchurch rebuild, education, economic policy, the end of our independent foreign policy, war, NSA spying, pro-corporate/anti-democratic trade agreements, corporate dominance of NZ, democracy for Canterbury’s regional council, democracy in general, or any other issues that actually matter to NZ and this election.

Armstrong’s at it again. David Slack says it all.

Here’s another example of how the Herald report when a senior National MP does something (genuinely) wrong.

Good points made here; another example of “Cunliffe does essentially nothing wrong; Key doing far worse not acknowledged.”

Imperator Fish hits the nail on the head: Understanding the 2014 Election Campaign; see also his comments on the latest ridiculous attack on Cunliffe.

Here’s a good blog from a few months ago about the media’s tendency to just repeat whatever John Key says without doing any fact-checking or real journalism.

This very detailed analysis by Frank Macskasy indicates the Liu hit was another example of the now-famous Dirty Politics. 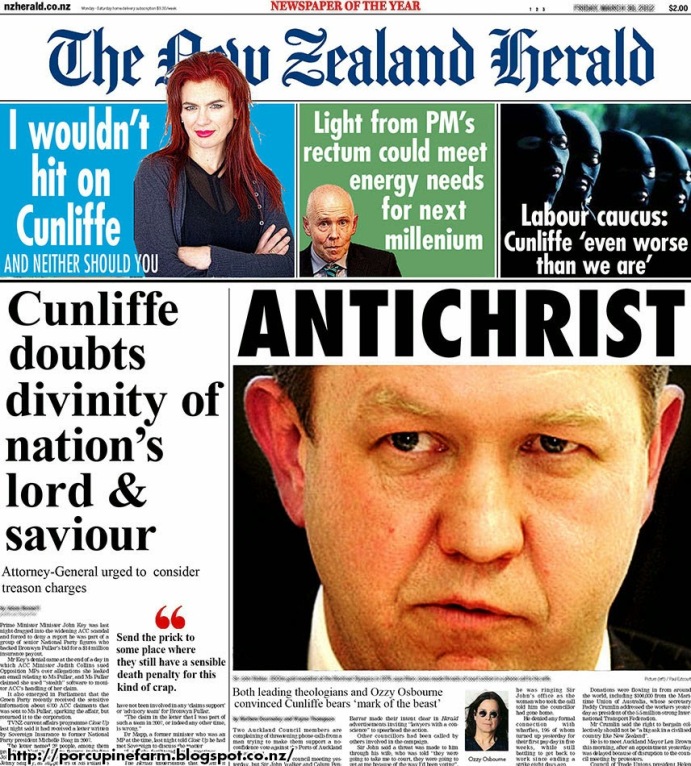