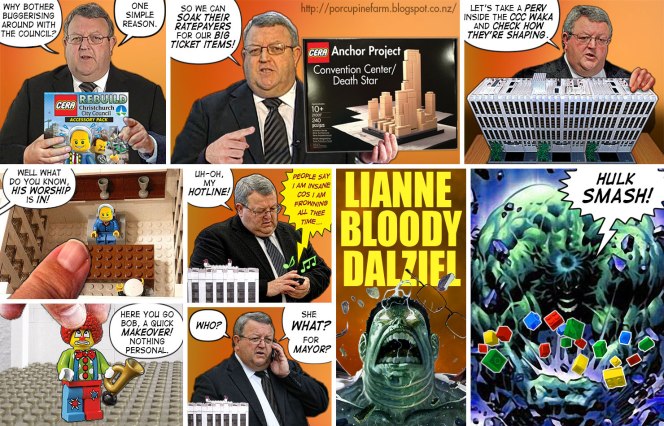 From Porcupine Farm
.
Though political scientist Bryce Edwards suggests maybe we shouldn’t vote in this year’s local body elections, I’ve never missed an opportunity to vote in any local or national election (anarchist sympathies notwithstanding).
This year’s elections in Chch are more important than most… we get to vote for a new mayor, mostly-new city councillors, community board representatives, district health board representatives .

Here’s how I’m voting this time, and – more likely to be useful for you – the resources I used to make my decisions.

I won’t fill out my form and post it until the last minute (Wednesday), so I’m open to changing my mind, and I’m keen to hear about any other useful resources you know about.

Mayor (pick one or none)
Lianne Dalziel

Canterbury District Health Board members (rank as many/few as you like, up to 26) (Updated 9/10/2013)
7 are elected but your votes are almost guaranteed to be transferred further down your list, so it’s worth ranking at least 12 if you can bring yourself to do so. I’ve ranked 25 to give my votes the maximum chance of contributing to anyone but Keown (see below).

Unranked: Aaron Keown (Only attended two full Health Board meetings in 2012 but still picked up a cool $26,000 for his troubles. Tries to go where the populist wind blows, but occasionally reveals his true colours as an ACT member and Marryattophile who called quake victims whiners.)

Disclaimer: Fine, I admit it. I linked to the Bryce Edwards post 78% for ego reasons. He mentions me!