A Gallup poll, of Americans by religious affiliation, about whether it’s ever justified for “the military” to target and kill civilians

The same poll, posing the same question about individuals or small groups 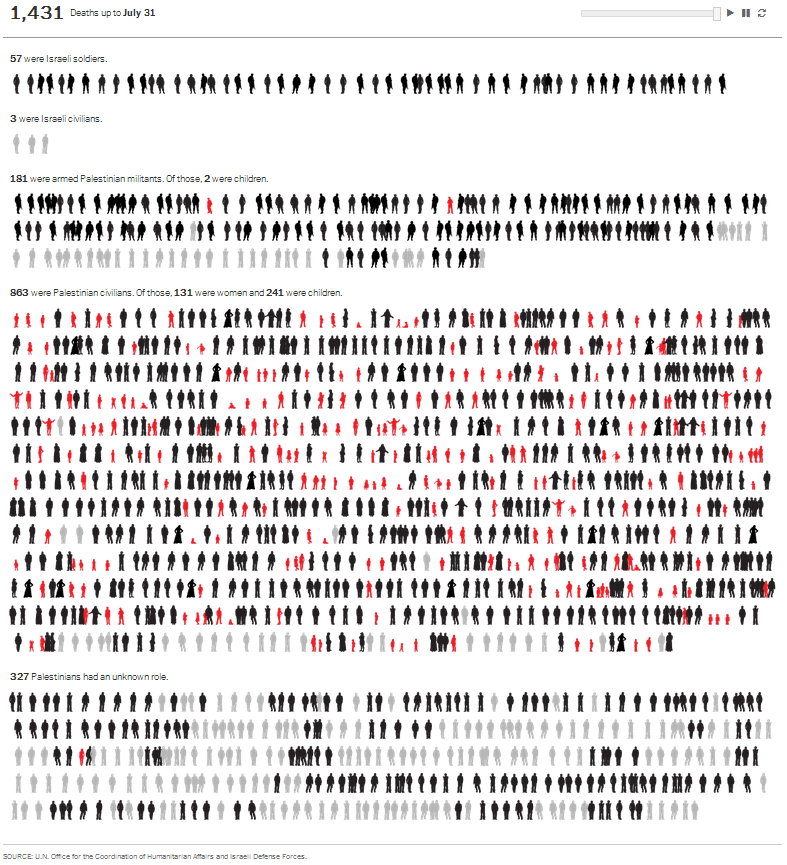 Israeli and Palestinian soldiers and civilians killed in the Gaza conflict, as at July 31

Palestinian and Jewish/Israeli-controlled land since 1946 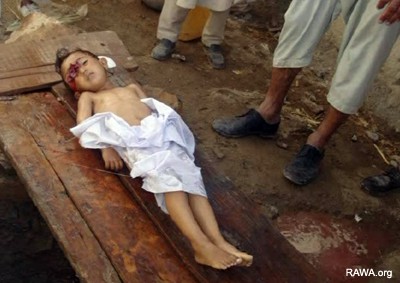 A 4-yr-old Afghan boy killed in January by US Marines, who said the weather was “dusty” and they assumed he was an enemy.

John Key and the New Zealand Parliament are right to condemn the killing of 298 civilians on Malaysia Airlines Flight MH17, and the impeding of investigations into it by Ukrainian separatists, and to express condolences to the victims’ families. Assuming it was a “tragic blunder,” it reminds us of the risks unrelated people are exposed to whenever anybody goes to war – a similar blunder was made by the US military in 1988, killing 290 civilians.

It’s a pity our government is not so decisive and unanimous in condemning the slaughter of civilians by our allies (or “very very good friends”).

The most obvious example at the moment is the Gaza conflict, in which over 1000 people (and counting) have died, mostly Palestinian civilians killed by our new allies, Israel. This is nothing new: since 2000, Israel have killed one Palestinian child every three days on average. The latest slaughter includes potential war crimes from Israel, such as deliberately targeting schools, hospitals, power plants and homes.

Here, Key has condemned the violence from both sides, pledged $250,000 humanitarian assistance for Gaza, called for a ceasefire and called the death toll “a blot on the world.” This is a good start, but his refusal to focus criticism on who’s doing most of the blotting (unlike Labour’s David Shearer or the Greens’ Kennedy Graham) makes his response ultimately inadequate.

Language like “Israel and Palestine have to learn to live side-by-side with each other” makes it sound like Israel and Palestine are two naughty kids who can’t stop fighting in the back seat of the car, rather than acknowledging that this is a situation of oppression and resistance (if that’s not clear to you, this video is a good, clear intro). Trying to be “balanced” or “neutral” on Israel/Palestine is exactly like being “balanced” on Australian colonial genocide or “neutral” between blacks and whites in apartheid South Africa. Israel bear the vast majority of responsibility for all those killed on both sides, because they’re in the position of the oppressor, coloniser and aggressor. Without acknowledging Israel’s occupation and domination of Palestine, we cannot understand the Israel-Palestine conflict, and without addressing it, we cannot genuinely hope for peace.

(Please note that I also oppose Hamas and Palestinian rocket attacks, for both ethical and tactical reasons. But it’s also vital to remember that in normal situations, people don’t elect governments like Hamas, or fire rockets at their neighbours. As Shearer, who worked for the UN in Israel, said: “It is not normal for 1.6 million Palestinians to be blockaded into a narrow strip of land, a situation that aptly fits its description as the largest prison camp in the world” and “These conditions will inevitably sow the seeds for further conflict if they’re not resolved.”)

Even worse is Key’s attitude to the killing of civilians by the United States, such as the hundreds of thousands (at least) killed by Bush’s war in Iraq, and the hundreds of children killed by Obama’s drone strikes. Even though Helen Clark ostensibly kept New Zealand out of the Iraq war, and drone strikes are contrary to international and NZ law, New Zealand assists with both of the above by providing intelligence gathered by the GCSB.

On this, we see nothing like the righteous indignation our Prime Minister expressed at the shooting down of Flight MH17, nor even the half-criticism of the Gaza slaughter. Key complained that we were “missing in action” in Iraq, has never bothered investigating whether drone strikes are compatible with international law (hint: they’re not), and is “totally comfortable” with GCSB data being used for drone attacks, even though they sometimes mistakenly kill the innocent, because they target “very bad people.” 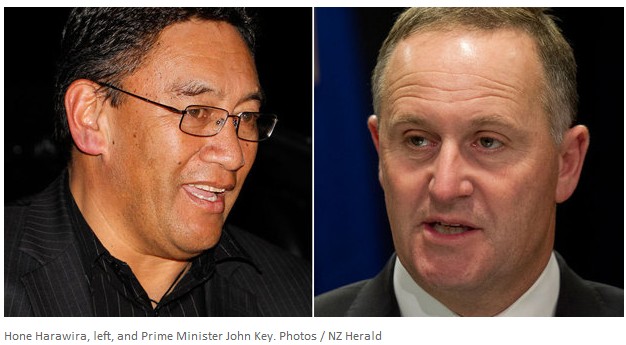 John Campbell has started a series of interviews with party leaders and their partners in their homes. The first two were with John and Bronagh Key and Hone Harawira and Hilda Halkyard-Harawira.

Both couples feed John a meal and talk about their lives and their political involvements – that’s about where the similarities end. Hone has photos on his wall from the Springbok tour protests. John famously can’t remember his stance on that issue, but he vividly remembers when he first wanted to be Prime Minister a few years earlier.

This is a good illustration of the main difference between Key’s and Harawira’s interviews, and indeed their overall political personas: Harawira’s interview is far more about politics and real issues, while Key’s is far more about superficiality, personality and content-free generalities like “making a difference” and “economic management” (Ha!).

Harawira’s concern for the marginalised is far more real. His biggest achievements are sacrifices he’s made for real live vulnerable people – be it Māori, the poor, South Africans suffering under apartheid, or his grumpy father-in-law. Mana’s policies are primarily motivated by real justice for those who most need it.

Moreover, Key’s claimed concern for kids growing up on welfare belies the fact that his government has kept benefit rates at 1991 levels. 1991, you may recall, was the year National deliberately set benefits to only cover 80% of minimum nutritional needs. This was an attempt to incentivise people into accepting the new low-wage jobs – or at least, those lucky enough to find jobs. They also encouraged a certain level of unemployment to drive wages down and again incentivise these poverty-wage jobs. This shows individual incentivisation may fill low-wage jobs, but it can’t cure unemployment: that requires broader socio-economic changes. These policies were and are sacrifices of the poor to support rich poverty-wage employers.

Two things have changed since then: One, poverty dropped slightly among working families (see p.47 here) since the last Labour government’s third-way policy, Working for Families. Key called WFF “communism by stealth” at the time, but he’s kept it, and praises it in the video for how it subsidises low wages. Two, National’s rhetoric is all anti-unemployment these days.

But three things still speak volumes: One, Key’s more willing to use taxpayer money to subsidise poverty-wage employers than make them pay living wages. Two, he sees no problem with WFF’s exclusion of beneficiary children from assistance, even though he notes they’re the majority of kids in poverty. Three, Key looks no further than individual solutions to the societal issue of unemployment.

Meanwhile, the real-life vulnerable people who miss out on the limited number of subsidised jobs offered by this “economic management” suffer now more than ever. Key thinks leftover Labour policies and welfare scapegoating is enough to help them. Harawira does not. I know which one I’d rather vote for.