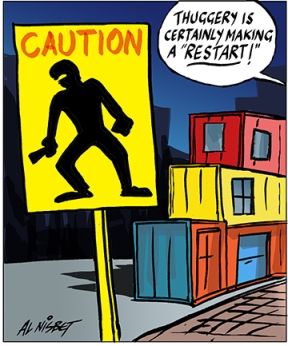 The earth turns, the grass grows, the Press publishes articles with zero analysis or respect for human dignity.

Capitalist society marginalises young people, complains about marginalised young people interfering with the smooth running of capitalist consumption, and thinks the solution is to scapegoat them and hide them away.

Let’s drive away the intimidating, anti-social, miscreant capitalist system from our city centre/world.

Fabian Mika’s lawyer is appealing Mika’s manslaughter sentence, suggesting his cultural background and upbringing should have be taken into account as a mitigating factor in sentencing.

It looks like this is being met with the predictable outrage when anyone notes there’s still ethnic inequality in NZ, coupled with the usual panic whenever someone suggests people’s lives are more complicated than just personal choice.

The justice system doesn’t deal with the wider social determinants of individual choices. In many ways, it can’t: it falls outside of the justice system’s purview to deal with (for example) economic inequality, the chief cause of high violent crime rates.

But the ‘justice’ system should at least acknowledge that these social determinants are very much unequal from one person or group to another.

You can accurately predict from someone’s class, ethnicity, or family situation that they’re a lot more likely to end up in jail than I am. (Or more likely to have a partner or parent in prison). That’s not fair, and it’s not chosen.

Yes, convicted criminals have made choices, I’m not denying that. But the social determinants of crime and punishment are true too, and too often we deny that.

So I definitely think someone’s experiences and social position should be considered among the mitigating/aggravating factors in sentencing. But that only deals with the tip of the iceberg of the problem: socio-economic inequality leading to manifold inequalities in crime and punishment.

According to Section 5 of the Corrections Act 2004, the “purpose of the corrections system is to improve public safety and contribute to the maintenance of a just society” through “safe, secure, humane and effective” sentences, assistance with rehabilitation and reintegration, the best decisions by courts and the Parole Board, and corrections facilities that meet the UN Standard Minimum Rules of the Treatment of Prisoners and other sections of the Act.

The implication is that prison punishment consists of a simple lack of liberty; to meet the standards of public safety and justice, we are taking prisoners out of the community and punishing them by depriving them of a certain degree and amount of liberty, deemed proportional to their unlawful actions. We’re not punishing them with physical violence and psychological humiliation. We don’t do it that way anymore … in theory.

So we know that something is seriously wrong with prisons when sentencing judges have to take into account the high likelihood of physical, sexual and emotional abuse when determining jail terms:

A judge at Whangarei District Court on Wednesday sentenced Glen Cooper [a transgender criminal] to a reduced prison term, because the likelihood of harassment in a men’s jail.

The court heard Cooper had already been attacked in jail while awaiting sentence.

The Department of Corrections said Cooper has not had sex change surgery so must go to the men’s prison.

On National Radio this morning, Kim Workman from Rethinking Crime and Punishment talked about how our prisons have become very secure, but highly unsafe. This Wikipedia article is a good read, making the same points; we have very few escapes or positive drug tests, but troubling figures for prisoner assaults on staff and other prisoners, and for mental health and suicide.

Let’s not let our base, vindictive, foolish, scapegoating punitive instincts get in the way of making prisons safer. When you take away people’s freedom and responsibility to look after themselves, it becomes entirely your responsibility to look after them and keep them safe.  Letting prisoners be exposed to abuse and violence can’t do any good, it goes against the legislated role of prisons, and in no way can it be considered just.

A third of Wellington’s crime takes place along the “Golden Mile” [between Parliament and Courtenay Place] … Last year 5753 reported offences were in the Golden Mile hot spot, out of 16,627 across the city.

Police revealed the figures yesterday as they announced a multi-agency crime-fighting strategy … [of] police taking control of Wellington City Council’s network of CCTV cameras, more officers on the beat, a focus on the “science of crime”, and working with other city agencies.

The initiative is part of the police’s new Prevention First model, which aims to reduce crime by 13 per cent by 2015.

Like their Christchurch counterparts a week ago, the Wellington police and media have been talking about something of which they’re profoundly ignorant – criminology.

The police officers who walk up the hill from the Golden Mile to the university to study their optional police criminology courses should* be learning on the first day that “reported crime” and police crime statistics are a wildly unreliable measure of real criminal activity. When the vast majority of crime is never reported, investigated or prosecuted, police crime figures will inevitably say far more about where police target than about where crime happens.

(* I say “should”. Actually, I know a guy who used to tutor the police students, and a disappointingly high proportion would argue in their essays that police statistics are in fact a reliable measure of crime, even though all research says the opposite.)

If they kept paying attention after that, they might learn that the most likely type of crime to never be apprehended is white collar crime, the crime of the rich and powerful, which by many accounts is a far, far bigger problem than blue collar crime. However, only a tiny fraction of law enforcement and penal attention is paid to it.

They might go on to learn that the most important factor determining whether we’ll have safer communities or anti-social behaviour isn’t what the police do or don’t do… far more important are wider socio-economic factors happening at the top of the cliff, regardless of what happens at the bottom. If they want to focus on “Prevention First”, they might realise that the best way for a society to reduce crime by 13% is to reduce economic inequality by the same amount.

All of which leads me to believe that if police really were taking the “science of crime” seriously, when they came back down the hill from the university, a lot more of them would stop at The Terrace and Parliament than at Courtenay Place.

[Edit: My friend who tutored the police students told me of a sad development that renders the premise of this blog obsolete, but its point unfortunately all the more relevant: “The VPEP contract was not renewed at the beginning of the year, so the police no longer get the opportunity to learn this stuff”]