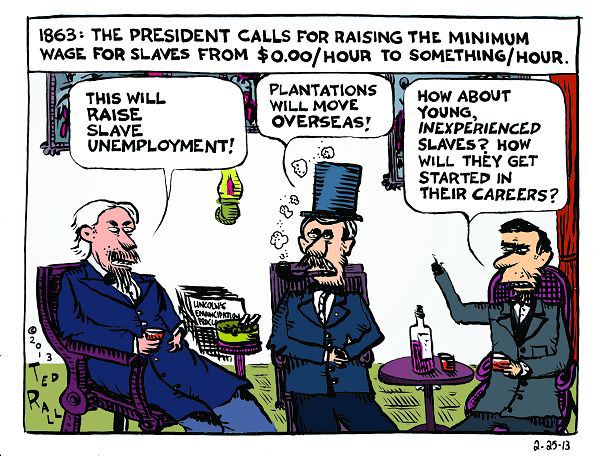 Well, they’ve passed the youth rate bill… Certain workers aged under 20 can now be paid at 80% of the minimum wage; a pathetic $10.80 per hour before tax. This comes a month and a half after a living wage was calculated to be about $18.40 per hour.

One thing I’ve noticed from the Facebook arguments I get myself embroiled in… Every time a debate comes up about the minimum wage, somebody makes the same tired point: if you raise the minimum wage too high, employers won’t be able to afford to provide jobs any more, or people with no skills will be priced out of the market, or workers will be costing employers more than they’re earning them, etc.

That’s of course true, but all it shows is that that the minimum wage CAN be too high, it doesn’t show that (or when) it IS too high.

You can’t just point out that sometimes a minimum wage can be too high and conclude that NZ’s minimum wage in March 2013 is too high (or as high as possible).  That’s not an argument, that’s just pure ideology without anything linking the theory to the present real life situation, therefore it can have no bearing on the present real life situation.  An argument would need to demonstrate that this theoretical danger is likely to happen at current wage levels, here and now… using research and evidence from here and now.

In fact, the evidence shows quite the opposite.  In the terse words of Treasury: the fear about minimum wage increasing unemployment “has not been true in the past. The balance of probabilities is that a higher minimum wage does not cost jobs”.  Increases in the minimum wage have not increased unemployment in recent history (if anything the relationship is the opposite, though it’s not a causal one: minimum wage has been kept low and unemployment pushed up by poor economic conditions and neo-liberal economic policy).

If we accept that it is desirable to have a minimum wage, we accept that it should be high enough to provide a decent living, without being so high that it reduces jobs.  The only matter for debate is where the balance is.  The Living Wage research indicates that our minimum wage is currently failing to achieve that balance, but the problem is not that it’s too high for employers to pay, it’s that it’s too low for workers to live on (and, by the way, John Key agrees).